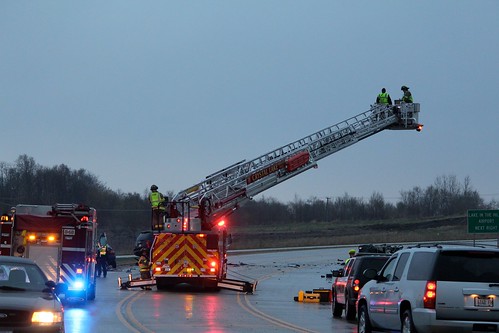 ©AVucha 2014
On April 28th at 5:45pm Crystal Lake Fire/Rescue and Crystal Lake Police respond to the area just south of the intersection of Pyott Rd. & Rakow Rd. for a 3 car head on collision. At 5:52pm a second ambulance was dispatched to the scene for more patients and Flight for Life was also requested but declined due to weather conditions. One subject was pronounced dead at the scene and the Coroner was called. Traffic was detoured around the scene for several hours.
Crystal Lake, Illinois

News obtained from the Northwest Herald:
CRYSTAL LAKE – The man killed in a multi-vehicle crash Monday evening has been identified as Crystal Lake resident John J. Moore.An autopsy performed by the McHenry County Coroner revealed Moore, 43, died of multiple blunt force injuries due to the crash.
A four-door Toyota traveling south on Pyott Road from Rakow Road crossed the lane and struck Moore’s northbound Honda about 5:45 p.m., according to a news release from the Crystal Lake Police Department.
A third vehicle – a Chevrolet Tahoe headed north – collided with the Honda after the initial collision, the release said.
Moore was pronounced dead on the scene.
The driver of the Toyota, Paul A. Melull, 60, of Lake in the Hills, was extricated from the vehicle by rescue personnel and taken to Centegra Hospital – McHenry with life-threatening injuries, according to a press release from the Crystal Lake Police Department. He has since been transported to Rockford Memorial Hospital where he remains in critical condition.
The two people injured in the Chevy Tahoe, driver Josue Moctezuma, 27, and Luz Citlali-Ramirez, 27, both of Crystal Lake, were treated and released from the hospital Monday night.
Dziewior said the cause of the accident is still under investigation pending toxicology reports and interviews with several witnesses. Members of the Crystal Lake Police Department, McHenry County Coroner’s Office and the McHenry County State’s Attorney’s Office are investigating.
Flight for Life services were not available due to weather systems in the area, Crystal Lake Police Spokesman Dan Dziewior said.
"Certainly if that was a viable option, it would have been utilized," he said.
The occupants of the Tahoe, a driver and passenger, were taken to Sherman Hospital in Elgin with injuries not believed to be life-threatening, the release said.
Pyott Road was closed from its intersection with Rakow Road to south of the Lake in the Hills Airport, a stretch near the border between Crystal Lake and Lake in the Hills. The road had reopened as of about 9:45 p.m. Monday, a dispatcher said.
No charges have been filed at this time, the release said.

expungement lawyer, lemon law lawyers, will attorney near me